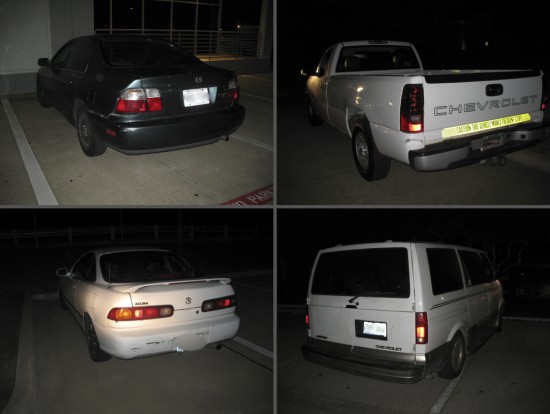 Two of these cars are harmless, and the other two are a problem. Would you know the difference? Would your Patrol Company know?

The two cars on the left are both a problem, the two on the right are innocent.

Dallas commercial properties are active 24 hours a day, sometimes that’s good, and at times it’s a surprise to the owners. Thieves rely on that to remain hidden in plain sight. Most commercial properties have cars that come and go, and employees that work late or leave cars on property. These cars often change on a regular basis. But if you pay attention, you can learn the patterns on every property. And a professional security officer can arrive on property and see 15 cars scattered among 7 buildings and spot a problem in less than 5 seconds. It’s about patterns. Thieves rely on casual observers, not people who know every car and every tenant, and who works when and leaves what where. They can’t account for that. So when they park their car on property innocently in a parking space they believe it will not attract attention.

Normally they wouldn’t. But if youre patrol company knows the property better than anyone else they will know right away there’s likely a problem.

The top right truck is parked in an unusual spot, but it’s been seen regularly at this property for months. The bottom right van is parked in a normal area and time for the cleaning crew. The two cars on the left are parked in areas where there are normally no cars, and neither car has been seen here regularly. The white car was stolen and had been parked on our property by the thieves who dumped it, we spotted it immediately and called Dallas Police after looking inside and seeing that it had a broken steering column. It was parked less than 6 spaces from three other cars that attracted no attention because they’re regulars. The top left car attracted our attention because no car had ever been parked in that spot at this time of night. We looked inside and there were tools and blankets. We suspected a thief was in the area. There was no visible damage. We didn’t really have enough cause to call 911, but we were convinced there was an issue. So we made a tremendous amount of noise investigating it, turned all our lights on, blew our horn, yelled out warnings and threats. Then stickered the car with a warning that we knew what they were doing were calling the police (even though we couldn’t). We left, and returned in 10 minutes. The car was now gone. The thieves had obviously gotten the message and aborted whatever they were planning.